A vibrant and dynamic lifestyle of a big city leads to a necessity its citizens to deal with  particular drawbacks. In case with the capital of Bulgaria – Sofia, unsatisfactory air quality level has become one of the most discussed topics not only among local environmental agencies but even among European regulatory intuitions: the European Commission has recently brought the case into the court because of the Bulgaria’s failure in taking measures in order to reduce air pollution. Indeed, according to the survey of citizens’ initiative AirBG.info, air pollution norms in Sofia were exceeded 70 times during the heating period from October 2017 to March 2018.

In fact, the capital is mainly exposed to such air-polluting sources like improper heating (with coal and wood) and older vehicles’ emissions. Another reason is believed to be industrial emissions which actually is expected to exist in every developing country. But in case the geographical feature makes things even worse.

Taking into consideration the described issue, the core objective of the further analysis is formulated as follows:

But first, we should get familiar with a data provided for the case. It can be grouped in the following way:

At this stage of the process we need to import the necessary data sets into the modelling software. We’ve made a decision to use R for the purpose.

2. Inspecting elements of the data sets and checking for inconsistencies

The analysis begins with the check of variables’ class, as the outcome for all the 3 data sets is aggregated into a list. We’ve noticed that the time class is character, which should be converted to “POSIXct” with the help of lubridate  library.

With the help of dplyr library we’ve managed to mark out 383 unique stations (grouped by geohashes) for air17 and 1254 for air18that are not present in both data sets, but in one of those. Concluding that there is no point in evaluating and inspecting such stations led to omitting them together with their observations from the data sets.  In the end of this step, a merged filtered data set for 2017 and 2018 was created , which allowed us to remove some auxiliary variables to get our code cleaner.

At this step our purpose is to check whether there are any NAs left in the citizens’ data for 2017 and 2018. After removing such inconsistencies we formulated a table, composed of an aggregated information about stations’ working features, where every station is denoted by “geohash”, columns “tmin” and “tmax” correspond to the beginning and the end of the observation period, respectively, and the column “days” is for the number of days recorded by every station. The data frame looks as follows:

5. Summarizing stations and visualizing them on a map

Then, in order to obtain some points of contact with reality, we came up with an idea to illustrate stations distribution within a country. With the help of geohash library our data was prepared for plotting by decoding topography features and then, there appeared a map of Bulgaria with some spread points – actual stations geohashes provided by citizens. The area with a high concentration of brown pigment indicates stations performing within a capital’s boundaries. 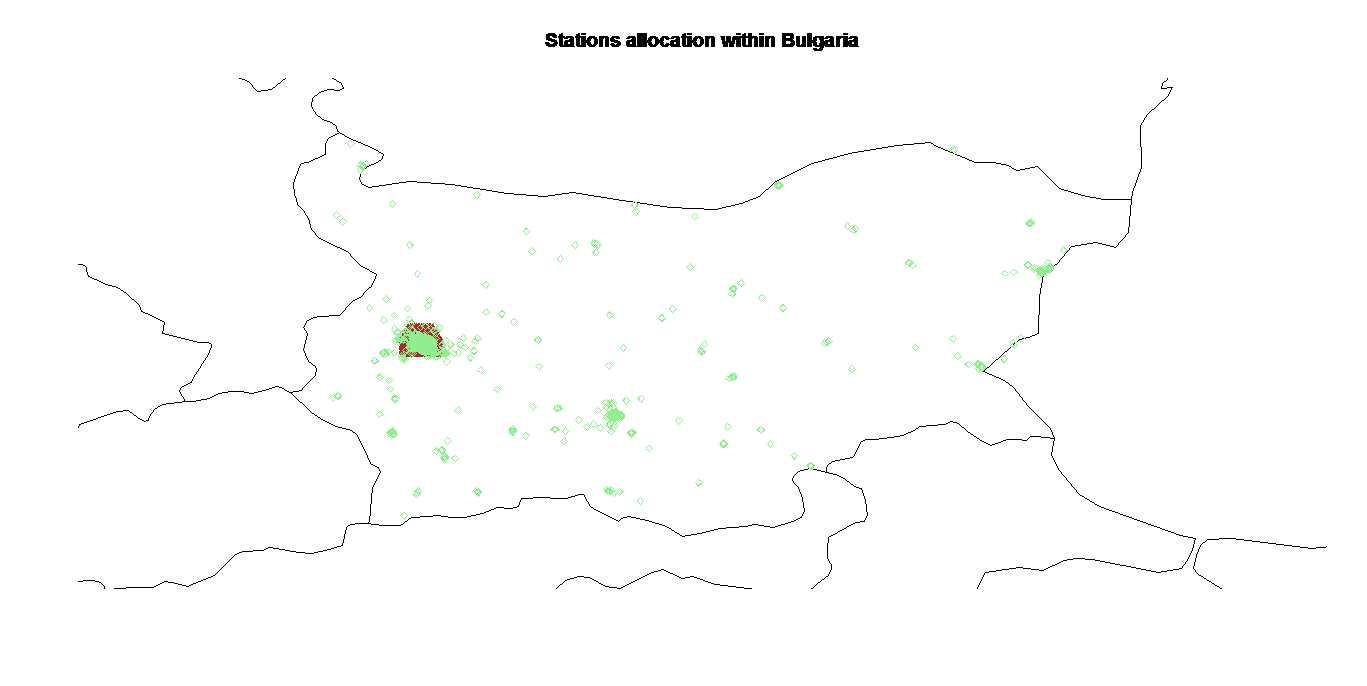 6. Filtering stations by space and time

At this stage of our survey we should determine a filtering rule in order to make a decision which stations to be excluded from the further analysis due to their unreliability. Plotting histogram and a box plot helped us to get a feeling of the stations’ performance. 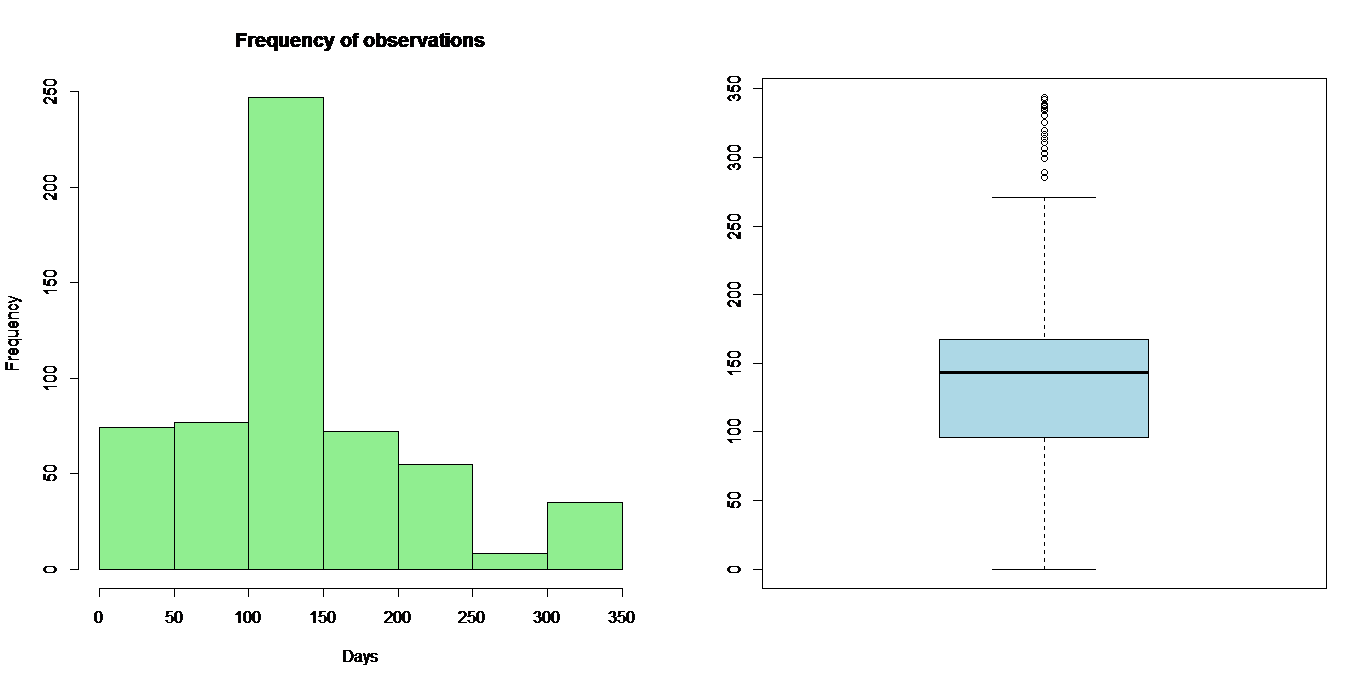 It’s clearly visible that there are enough stations with less than 50 days recorded while only a small amount of latter has been performing for the whole year or at least for more than 250 days. Still, we believe that it’s sensible to see some basic statistics features before making a final decision.

With the help of fBasics library it was discovered that a number of recorded days varies from 0 to 343 while the mean value is equal to 138 days. But in case we’d rather focus on quantile measurements, presented below:

As we can see for in the column with 5% result, the number of observations and recorded days are 238 and 16, respectively. This means  that our potential filter features should be chosen under or equal to measured values in order to keep the data statistically significant. Therefore, our filtering rule excludes from the data set every station with available days ≤10 and recorded observations≤168.

1. Creating the final list of geo-units for the predictive analysis

At the first stage of the new week we assume that air quality could vary depending on the elevation rate. For the purpose of the further analysis the topography data set with 196 point in the city of Sofia is used. Guided by certain considerations, we have adopted a mentor’s approach of dealing with topography data – at first, we created an auxiliary table which illustrates the distance between particular stations (in rows) and Sofia’s topo points (in columns). Then, we added a column which indicates the nearest point from topography data for every station in Sofia.

After  two data sets had been merged by the feature “pnt” and ordered columns in a logical sequence, we came up with a table below:

Graphic representation of the results is always useful to ensure we’re on the right way. Therefore, here’s what stations’ distributions (blue inverted triangles) within boundaries of Sofia (grey points) look like: 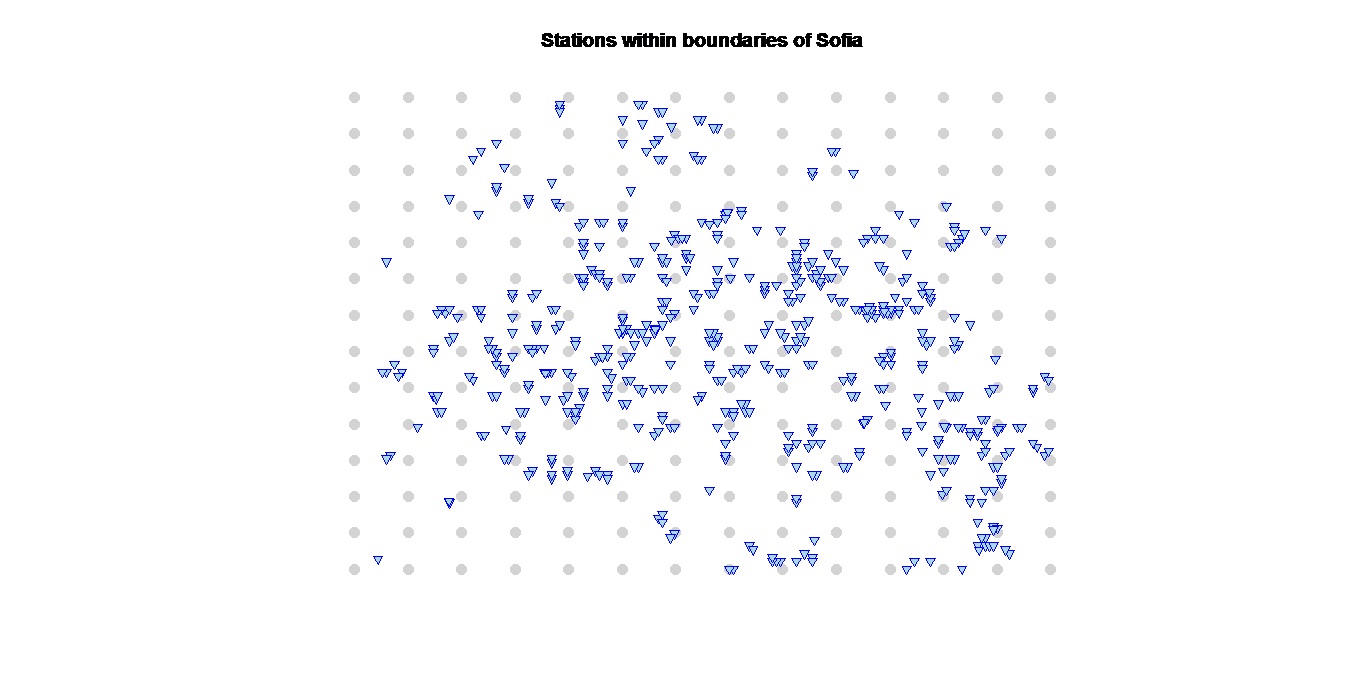 At this stage we summarized parameters for every of 196 points formulated in previous steps and gave proper names to columns:

3. Cleaning data of mismeasurements and inconsistencies, comparing them with the official data

We assume that fixing inconsistencies is crucial for obtaining relevant results in every analysis.  That’s why at first we made sure that there’s no NAs left in the data set. Consequently, we moved our focus onto 5 official European stations, where all the early years were previously removed from the data’s folder:

Thus it comes to dealing with a meteorology data. After the necessary data set had been imported and filtered, we created a special vector where minimal and maximal values of weather features and concentration of P10 to be recorded.

With the help of editrules library we formulated a filtering rule for outliers using extremum values from the cc vector as benchmark in order to move on to localizing potential outliers. This time there were 70259 mismeasurements in the column “P1” from the auxiliary data set.

We found out that 46 stations were removed from the data set due to the overall mismeasurements (by “perc” value).  Then it came to a repeated error localization, this time by features of our interest, i.e. by “P1”, “temperature”, ”humidity”, ”pressure”. Quantile measurements for the pressure had a very weak performance.

The final point of this step was excluding all the outliers which were lying between set by cc-vector boundaries. We believe we got a data set with reliable measures after this action.

At this step our purpose was to set a time series vector on hourly basis for every feature (“clust.ID”, “Elev”, “time”, “P1”, “temperature”, “humidity”, “pressure”) of every geohash by creating two separate aggregated lists and merging them. In short, we think we’ve done everything to move on to the inspection of statistic characteristics.

The final stage of this week started with some basic analysis of statistic coefficients. The results on
Skewness and Kurtosis parameters are presented as follows: 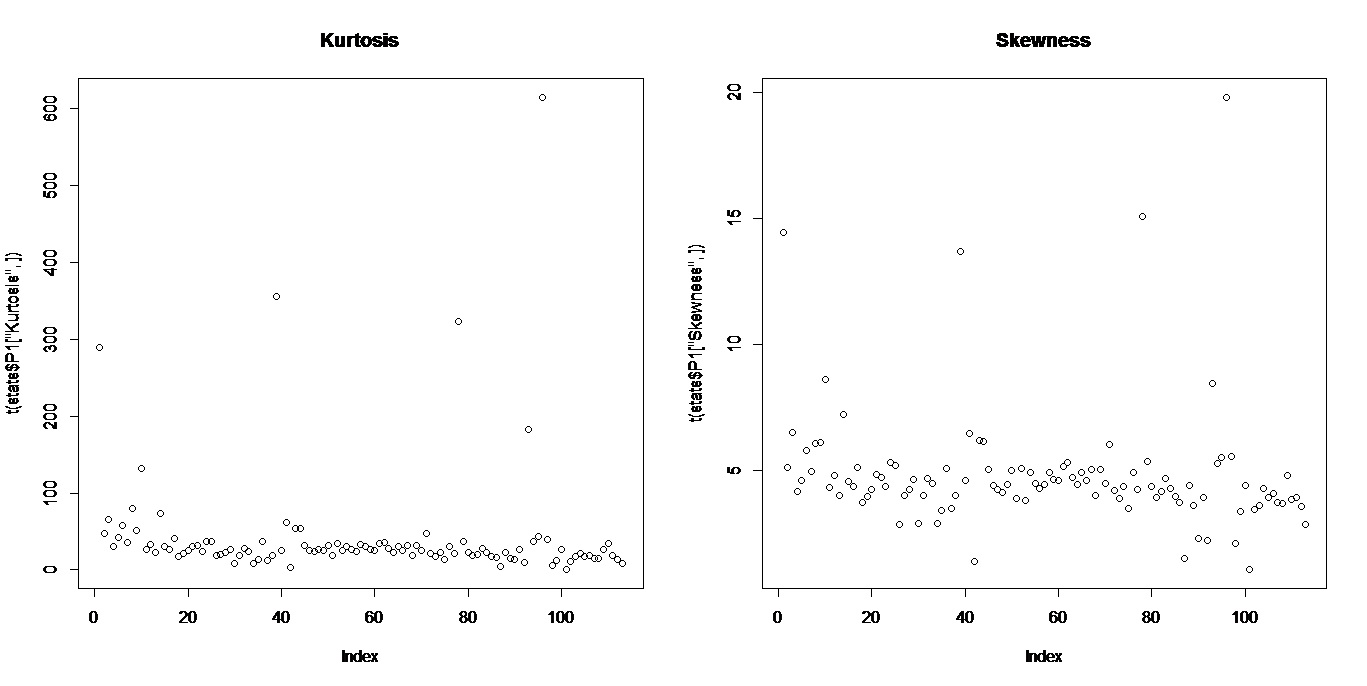 The lack of symmetry in Skewness distribution is clearly visible, all the values are positive and are stored between 3.46 and 3.61, that’s why the asymmetric tail is located on the right. We assume it means that during the observed time interval there was a certain period when the concentration of particulate matters was above the norm.
Kurtosis, for its part, demonstrates inflated values as well, which vary from 13.34 to 14.05. This should tell us that our data is far from the normal distribution.

Then we moved on to the time series stationarity test for our clustered data, in case it was Dickey-Fuller Augmented Test (ADF Test). It was necessary to check whether our series are stationary, because further use of data with unit roots present  may cause building a spurious regression. 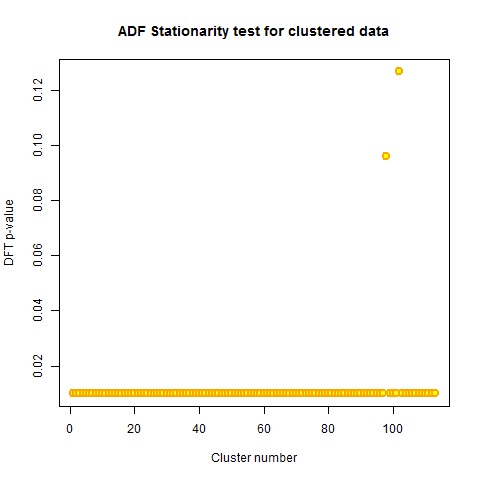 The test has showed satisfactory results, we found out that only two clusters have statistically insignificant p-values – 98th and 102th. Still this brings no harm to the overall view.

That week we returned back to our 5 official European stations in order to fix variables’ classes in case of necessity. We were interested in columns “DatetimeBegin”, “DatetimeEnd” and “Concentration”.

The time series vector for official P10 measurements was created on the same scheme as in the 4th step of the previous week, but with adding a column of “Concentration” to the time series in parallel. Then there were left a few technical moments with binding data sets of two available years are clearing up all the duplicated values.
After all the filtering and cleaning procedures it turned out the time interval of our interest lies between the end of November 2017 and the middle of September 2018.

The results from above gave us a base for a visualization of the missing values in the official stations. The graphic illustrates a situation with data distribution both before and after interpolation. It’s noticeable that the highest concentration of missing gaps was in February August and September 2018, which had to be fixed by a linear interpolation.

Unfortunately, our research team’s competence was limited until this stage. But we believe our colleagues will succeed in determining the optimal forecasting model to address such a topical issue as air pollution.