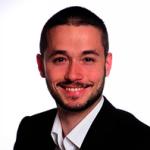 You actually answer the question in your video, slightly before the three minute mark. You used a CNN model instead of BERT due to some implementation difficulties. The winners in Task 2 did use BERT but it is commendable that you are aware of the model and tried it.

In your best result, Kaufland #3, you seem use FoodNet (Padley et al 2017, https://arxiv.org/pdf/1709.09429.pdf). This an ensemble method (Alex, Google, ResNet, etc.), each of whose components are heavy. Do you have an estimated running time on an embedded device (scales, rasp pi) for single image classification? Thank you and good work!

Hello, you are a clear winner in the hardest Task 3, and you did reasonably well in Task 1: even though there are quite a few teams ahead of you, the difference to the top team is just 0.05 or so. You also seem to have built one of the most complex models. Yet, on Task 2, you did not place in the top 8. How do you explain that given that you did reasonably well in Task 1, which is similar?

You’re on to something as you have the best score! I’m also a proponent of SVM “on top.” Do you think you would have done even better with a neural network as a feature extractor? If yes, what was the limitting factor, why didn’t you try?