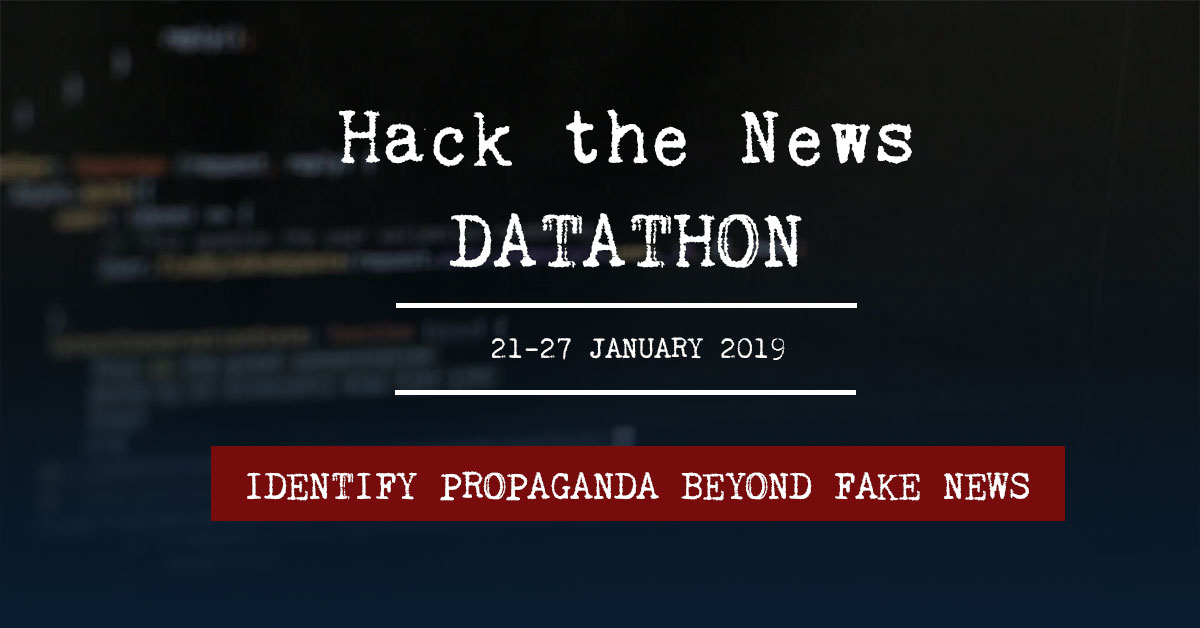 The current political landscape is shaped by extreme polarization of opinions and by the proliferation of fake news. For example, a recent study published in Science has found that rumors and fake news tend to spread six times faster than truthful information. This situation both damages the reputation of respectable news outlets and it also undermines the very foundations of democracy, which needs free and reliable press to thrive. Therefore, it is in the interest of the public as well as of the news organizations to be able to detect and fight disinformation in all its forms. While most previous work has focused on “fake news”, here we are interested in propaganda.

Propaganda is the deliberate spreading of ideas, facts, or allegations with the aim of advancing one’s cause or of damaging an opposing cause. While it may include falsehoods, this is not really necessary; rather, propaganda can be seen as a form of extreme bias. Yet, propagandistic news articles usually use certain techniques such as Whataboutism, Red Herring, and Name Calling, among many others. Detecting the use of such techniques can help identify potentially propagandistic articles. Here, we ask you to create a tool that can help with this endeavor.

Note that any news article—even such coming from a reputable source—can reflect the unconscious bias of the author, and thus it could possibly be propagandistic. Therefore, it is important not only (i) to flag the article as a whole, but also (ii) to detect the potentially propagandistic sentences in a news article, and even (iii) to identify the exact type and span of use of propagandistic techniques. You will be provided with a set of articles taken from online news sources, as well as with annotations of the span and type of the propagandistic techniques used in each of them. Your task will be to develop a tool to perform tasks (i), (ii) and (iii).

Undoubtedly, propaganda detection is a difficult problem. While obvious propaganda might only fool a limited number of people, subtle propaganda can potentially go unnoticed even by the most careful readers. This raises the natural question: How can we expect computers to recognize propaganda if even humans often fail to do so? And how good AI get in this? In order to shed some light on these questions, we have defined three tasks in increasing level of difficulty.

Each task is built around a separate annotated dataset, split into Train, Dev, and Test. You should train your model on the Train set. The evaluation during development time should be conducted on the Dev set. The final evaluation will be on the Test set, which will be kept hidden from the participating teams. The evaluation measures for the model performance are defined as follows:

Two sets of documents will be provided: one for PAL and another one for PSL and PTR. Below we show a sample snippet of a propagandistic article in order to illustrate the PSL and the PTR tasks (the same article for PAL would appear on one single line with newlines replaced by two-spaces). Line numbers ([n]) have been added for explanatory purposes, but they will not appear in the files. Each article has an id, and in this example, we assume that the article’s id is 123456.

Keep in mind that the DEV SET will be opened on Friday with the official opening of the Datathon (follow the #announcement channel in the data.chat). You will be able to test your solutions with the TEST SET that will be shared on Saturday evening!

* All of your questions regarding the data set you can ask in #nlp_text_mining channel.

[2] Democrat West Virginia Sen. Joe Manchin says his colleagues’ refusal to stand or applaud during President Donald Trump’s State of the Union speech was disrespectful and a signal that the party is more concerned with obstruction than it is with progress.

[3] In a glaring sign of just how stupid and petty things have become in Washington these days, Manchin was invited on Fox News Tuesday morning to discuss how he was one of the only Democrats in the chamber for the State of the Union speech not looking as though Trump killed his grandma.

[4] When others in his party declined to applaud even for the most uncontroversial of the president’s remarks, Manchin did.

[5] He even stood for the president when Trump entered the room, a customary show of respect for the office in which his colleagues declined to participate.

There are several propaganda techniques that were used in the above article:

In the next subsections, we explain the data format for each task.

The training data for the PAL task consists of about 60k news articles, annotated as either “propagandistic” or “non-propagandistic.” The annotation was done indirectly using a technique known as distant supervision, i.e., an article is considered propagandistic if it comes from a news outlet that has been labeled as propagandistic by human annotators. For example, all articles from http://Inexistent-Site-Supporting-Brexit.co.uk would be labeled as propagandistic, even though some of them may not be such, which could potentially introduce noise in the dataset. It has been argued elsewhere that models can deal with such noise if the training data is large enough.

The input data will be presented as one big tab-separated file, where

Your system should produce a tab-separated file that contains two columns: [article id] and [propaganda/non-propaganda].

The training data for the PSL task consists of 451 news articles with sentence-level annotations. Each sentence is annotated as containing propaganda or not. The dataset is split into Train, Dev and Test parts.

For each document, there will be two files: PSL-1 and PSL-2.

PSL-1: The title of an article will appear in the first line and the contents will appear from the second line onward, one sentence per line. The first sentence will have id 1.

PSL-2: Moreover, you will be presented with one tab-separated file for each news article containing three columns with annotations in the following format:

Your system should generate one single file as output in the same format as the tab-separated input file, but replacing “?” with “propaganda” or “non-propaganda”. Here is an example referring to the article above:

The training data for the PTR task consists of the same 451 news articles, but this time the annotations will mark the span and the type of propaganda technique that has been used. As for the other two tasks, the dataset will be split into Train, Dev, and Test parts.

For each document, there will be two files: PTR-1 and PTR-2.

PTR-1: This file will be in the same format as for the PAL task.

PTR-2: Moreover, you will be presented with one tab-separated file for each news article containing four columns in the following format:

where the label is one out of the 18 possible propaganda techniques. The span will mark character-level offset.

You are expected to produce one single file with your classifications in the same output format as in the PTR-2 files. Here is an example referring to the article above:

Note that some of the labels are complex labels but are still one category. For example “Name_Calling,Labeling” and “Exageration,Minimisation”: those are two, not four categories. See the file “propaganda-techniques-names.txt” in the dataset for a list of the categories.

In addition to the above-described output files, which will be evaluated by an automatic evaluator (see Model evaluation), the participants are asked to write an article or a Jupyter notebook in the Data Science Society authoring tool to document their solution, which as a minimum should include the following:

Participants that do not provide any documentation for the solution will not be considered for the final ranking, while participants with very close scores on the test datasets may be reranked based on the quality of their documentation.

The registration is free but mandatory – Join before 25. January!