The National Statistical Institute of Bulgaria (NSI) conducts annually a Household Budget Survey (HBS) with an objective to get reliable and scientifically founded data on the income, expenditure, consumption and other elements of the living standard of the population as well as changes, which have occurred during the years. NSI is considering a change in the periodicity of the Household Budget Survey from yearly to once on every five years,In order to optimize the cost of carrying out the survey. Hence We are creating a model which will predict household expenditure for the next four years using linear regression model and time series. The algorithms that we will be taking help from are linear regression model & Autoregressive integrated moving average(ARIMA). So lets not waste any time and move on with it ! 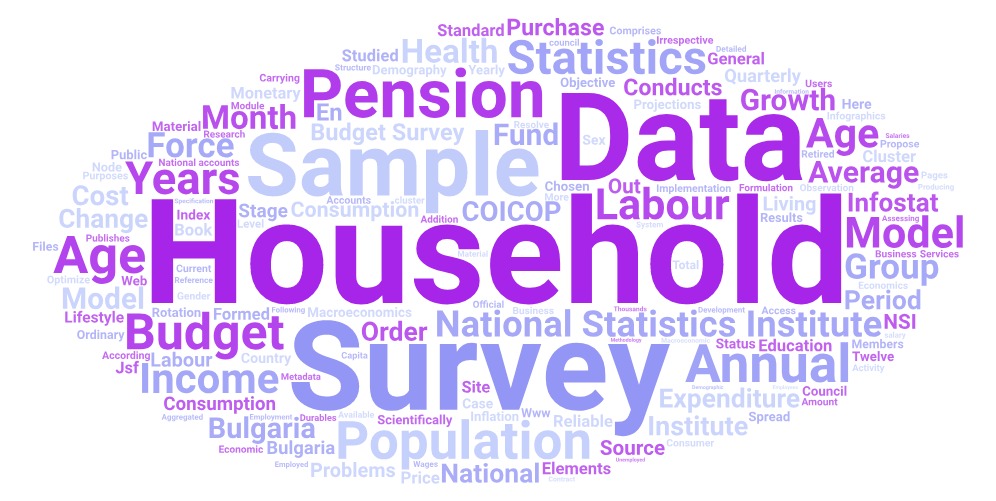 STEP I : Understanding the data.

The Household Budget Survey is a sample survey by implementation of two-stage cluster. The general population from which the sample for the survey is formed comprises all the households in the country. Institutional households are not studied by the household budget survey. The unit of observation is every randomly chosen ordinary household irrespective of the number of members and their material and personal status. The sample size since 2010 is 3060 households each quarter spread into three sub-samples for 1 020 households. Each sub-sample is monitored for one month from each quarter, based on the rotation sample model. In this way, each household in the sample participates in the survey four months during a twelve-month period. The data provided is from 2010-2017.

The following packages have been used-

The Algorithms that have been used are-

We have used linear regression to find the significant relation between expenditure and other parameters such as income, age,sex,population,pension etc. We have also taken the help of various charts to dig deep into the data. 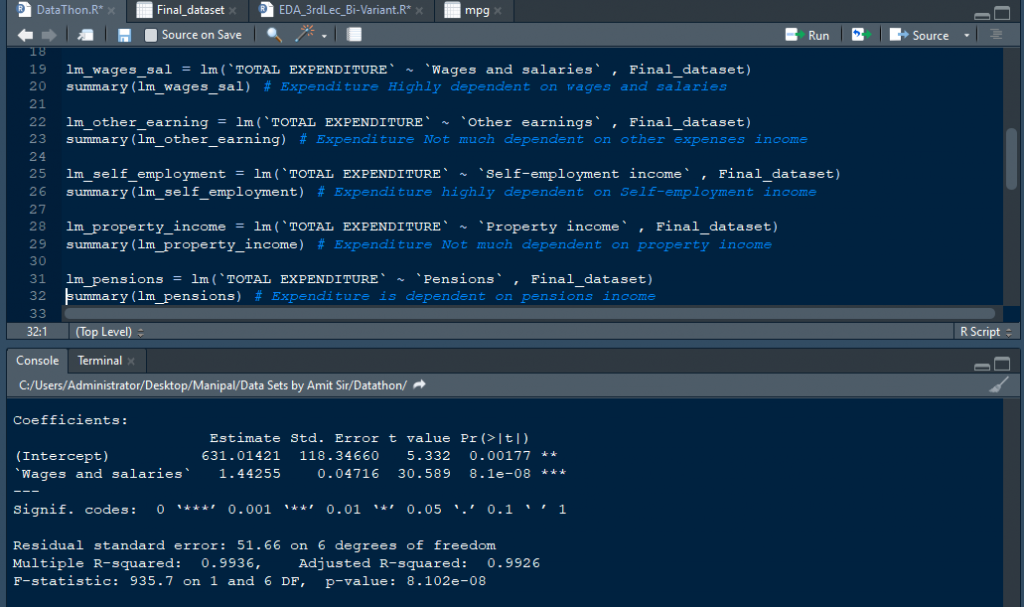 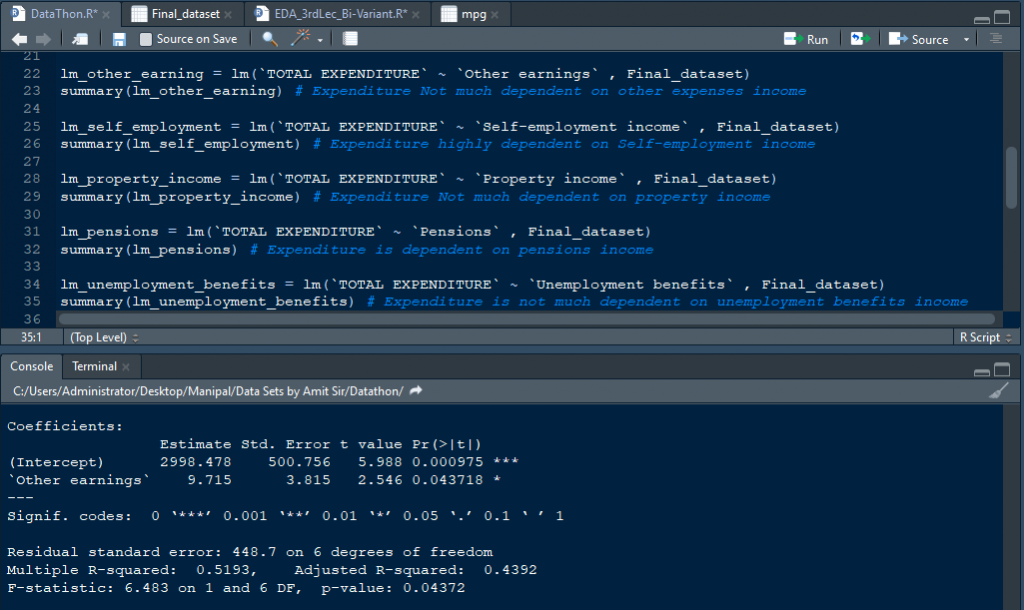 We have used three different approaches to predict the household values.

The provided data is in quarters but the expected prediction is supposed to be in years.  Hence the first step is to transform data into years.

2: Divided the data into test and train data.

3: Used Time Series Linear Model to train the data based on the multiple significant columns identified and predict total expenditure.

[Note: Given values for the significant independent columns , we can predict the expenditure for future years]

Codes and Graphs for prediction on yearly basis 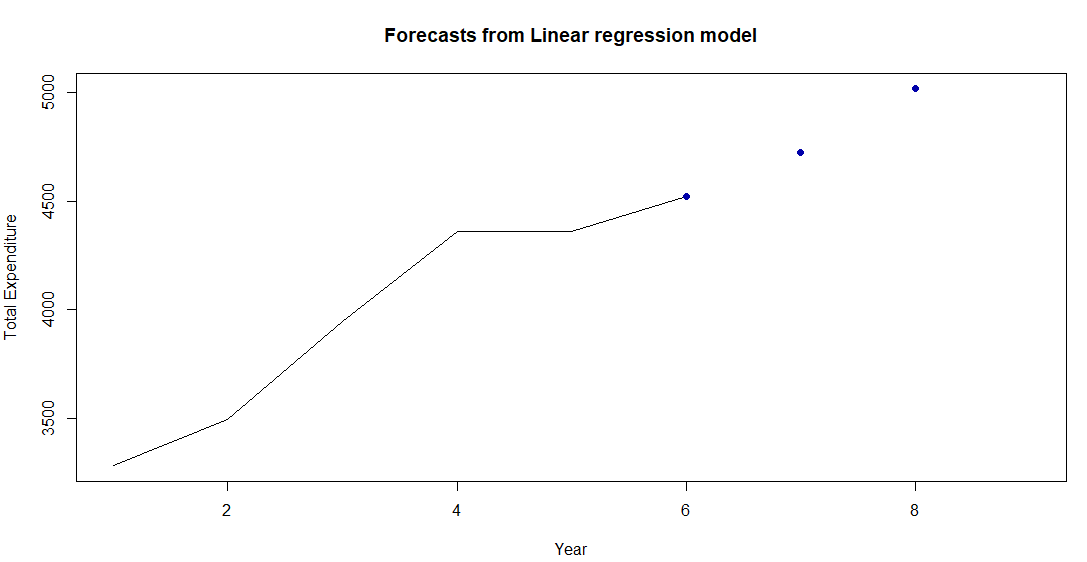 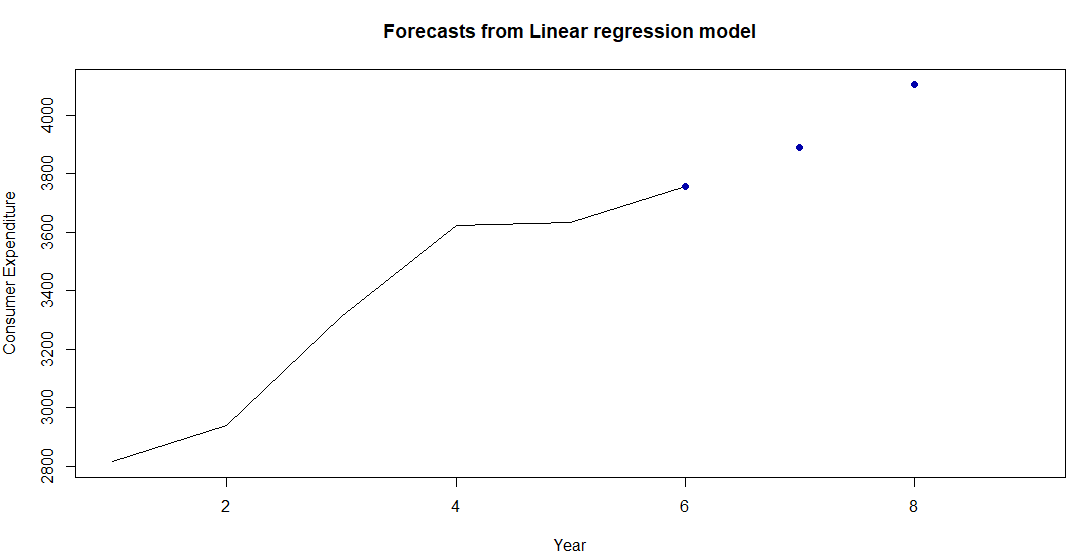 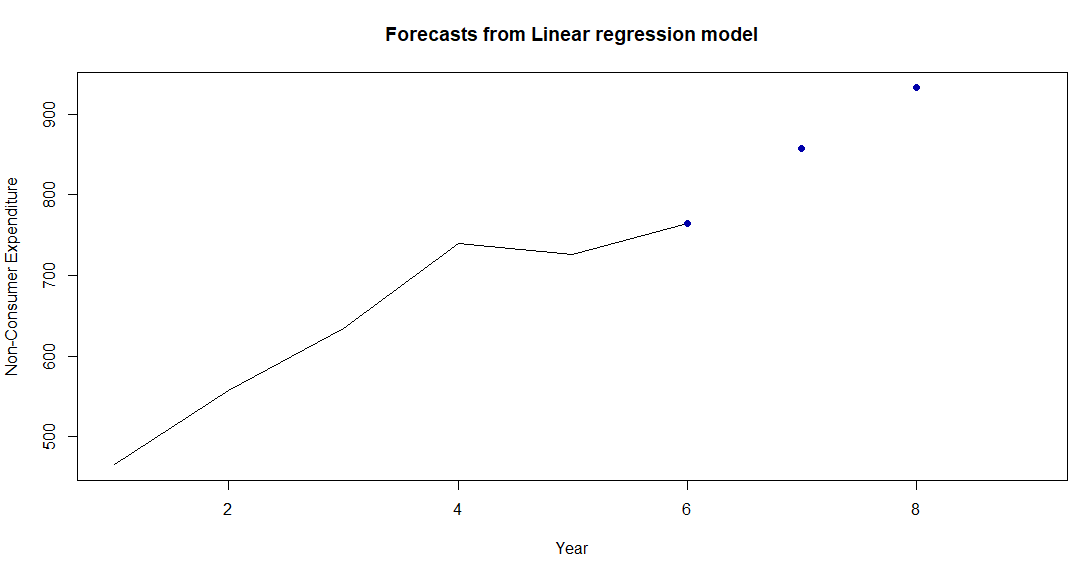 Here are some predicted graphs that we performed on our test and train data.
(Train data from 2010-2015 ; Test data 2016-2017).
From this here are some following observations which is given below.

1. The following graph represents Total expenditure against yearly Quarters.
a. The Q1 (Quarter-1) of every year shows less expenditure compared to Q4 (Quarter-4) which represents seasonality.
b. This is because of the Christmas and New year’s eve that comes under Q4, where people celebrate on a larger scale. 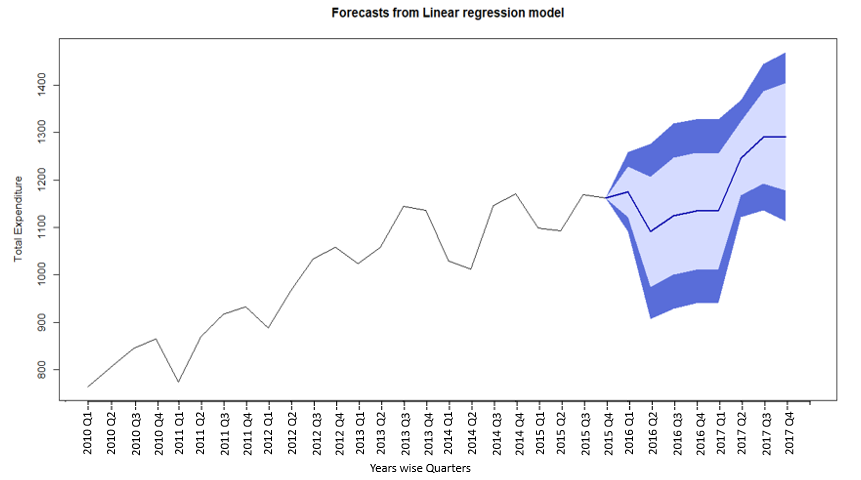 2. The following graph represents Total consumer expenditure against yearly Quarters.
a. It represents the linearity in trend that people’s expenditure is always high during the 4th Quarter of the year w.r.t to first 3 Quarters.
b. The expenditure in 3rd Quarter is comparatively high because of the SOFIA Restaurant week in September, as the expenditure on food and non – beverages is more as compared to Alcoholic beverages. 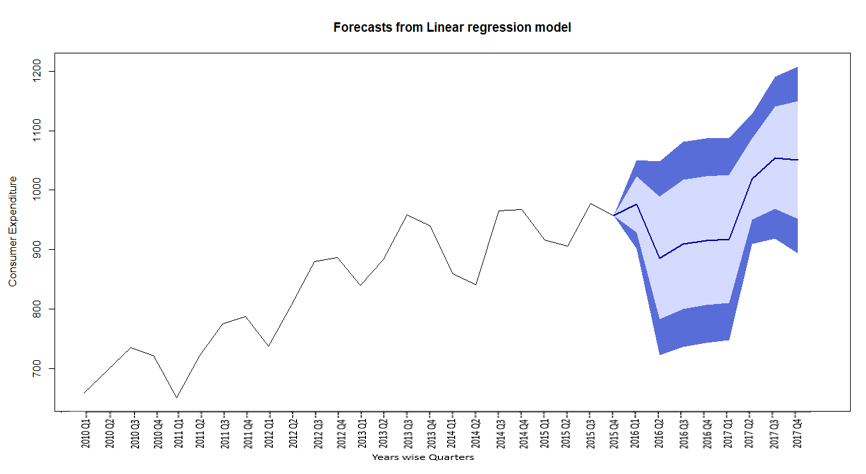 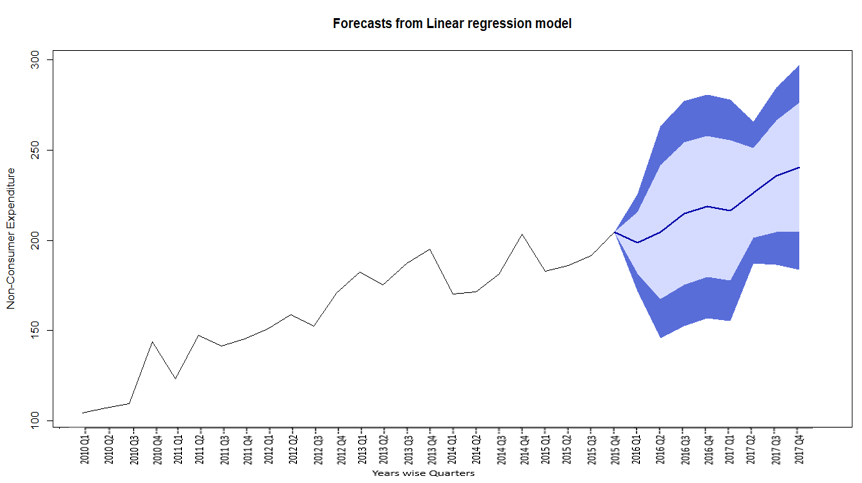 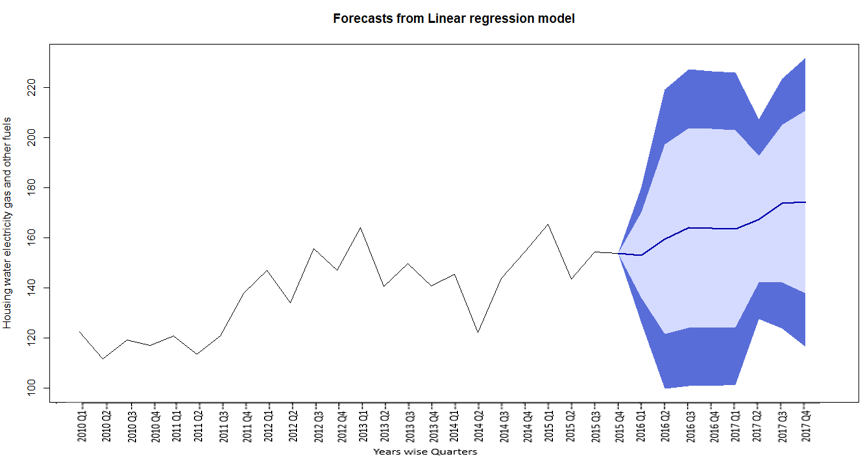 6. The following graph represents Total Taxes expenditure against yearly Quarters.
a. It shows the linearity in the graph that with every year the taxes are increased by the government , which also contributes in the non-consumer expenditure 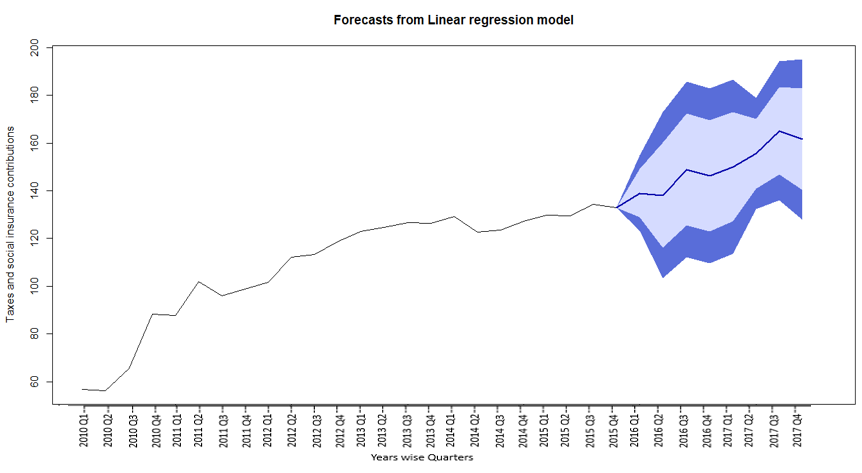 We have used auto-arima to forcast the household expenditure for next four years with reference to the historical household data from 2010.

We would recommend to go with approach one and two which is ‘Time series linear model’ to predict expenditure to build on few significant factors that are mentioned in above approach descriptions.