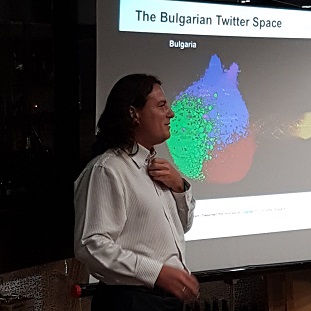 Preslav Nakov co-authored a Morgan & Claypool book on Semantic Relations between Nominals, two books on computer algorithms, and many research papers in top-tier conferences and journals. He received the Young Researcher Award at RANLP’2011. He was also the first to receive the Bulgarian President’s John Atanasoff award, named after the inventor of the first automatic electronic digital computer.

Preslav Nakov is Secretary of ACL SIGLEX, the Special Interest Group (SIG) on the Lexicon of the Association for Computational Linguistics (ACL). He is also Secretary of SIGSLAV, the ACL SIG on Slavic Natural Language Processing. He is an Action Editor of the Transactions of the Association for Computational Linguistics (TACL) journal, a Member of the Editorial Board of the Journal of Natural Language Engineering, an Associate Editor of the AI Communications journal, and Editorial Board member of the Language Science Press Book Series on Phraseology and Multiword Expressions. He served on the program committees of the major conferences and workshops in Computational Linguistics, including as a co-organizer and as an area/publication/tutorial/shared task chair, Senior PC member, student faculty advisor, etc.; he co-chaired SemEval 2014-2016 and was an area co-chair of ACL, EMNLP, NAACL-HLT, and *SEM, a Senior PC member of AAAI and IJCAI, a shared task co-chair of IJCNLP, and a tutorial chair of ACL.