Through a basic visualisation of Volume of Sale and Actual Price a dependence may be established between the price decrease and volume uplift. In the same time matters if the week of promotion is second or third consecutive in a row.

Another visualisation of the initial dataset shows that presence of seasonality effect might be rational to analyse in the future model. 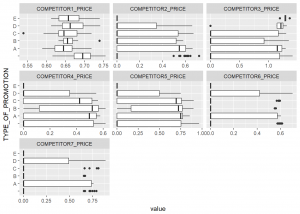 It seems that there is some relationship between the promotion type and the price of competitor 1. For the rest it does not appear to be much of a relationship. Let’s look at it in more detail.plot_boxplot(Data[,c("COMPETITOR1_PRICE","hasPromotion"),with=F],by="hasPromotion")

It looks that when this business has a promotion competitor 1 also tends to have a lower price as well. Let’s use the same statistical test as above to check if the difference is actually significant

Yes there is a statiscally significant difference. It seems that on average when we have a promotion the price of competitor 1 is 5% lower.

For further exploration let’s check the relation between sales and the rest of the numerical variables.

Features / variables were extracted out of the existing data. Mainly, these are changes in volumes and prices over time, between periods and promotions. These variables are used to create the model.

We extracted many different variables from the original input, so that we could observe how dynamical changes in resulting data would effect on the sales volume. Those variable showed various importance for changing volume sales. Having them constructed, we moved on with a multiple linear regression, so that we could explore which the significant factors were and at what level would they affect the volumes.

A simple data preparation was done after that by ordering correctly the categories of the few categorical variables, so that the reference category would be a meaningful one.

After that we started testing the analysis output with different variables, until an optimal level of error was achieved.

The fitting of the predicted values is here: (line graph)

All that was achieved in a simple KNIME workflow: 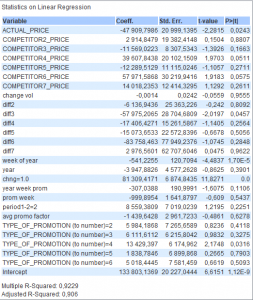 According to the model and analysis made average price of the target product and type of promotion are the main volume uplift drivers.

According to analysis made promotion C has the biggest effect, according both to the p-value of the Multiple Linear Regression (LMR) Model  obtained and the below observation:

In marketing strategy, cannibalization refers to a reduction in sales volume, sales revenue, or market share of one product as a result of the introduction of a new product by the same producer.

According to the p-values in the LMR Model we can justify which Competitors have impact on the sales volumes of the targeted product i.e. cannibalization effect – being Competitor 4 with the strongest such effect.