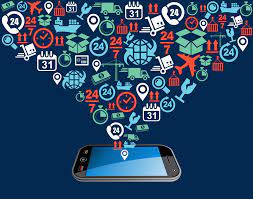 Flutter is a Google-created open-source mobile app development software development kit. The open source refers to software for which the source code is made freely available. It is used to create high-performance, high-fidelity hybrid applications for Android and iOS operating systems. Flutter is also the primary technique of generating applications for Google Fuchsia, which is also open source.

It is Google’s first portable user interface platform or toolkit for designers, developers, and creative coders to create aesthetically pleasing, natively compiled, easy-to-use applications and digital content for all platforms, including mobile phones, smart watches, car systems, web applications, tablets, televisions, and desktop/laptop computers, all from a single codebase for an ambient computing world. It makes cross-platform mobile app creation for Android and iOS platforms simple and straightforward; all you need is a single code base and the ability to run on any device or platform.

Flutter is free and open-source platform. The platform is built on Dart, which is a fast and focus oriented programming language. Flutter apps have a nice look and feel to them, but they don’t sacrifice ease of use, navigation, or the developer’s own original app design. This means you have complete control over what you see, regardless of platform or device limitations.

Flutter’s engine is primarily written in C++. It makes use of Google’s Skia graphics package for low-level rendering. The Flutter Framework is a new responsive framework that comes with a wide range of platforms, a track layout, and the foundation for building new and optimized widgets.

Basis of the Foundation Library

Dart’s Foundation library ensures backward compatibility so that future designs and functions can be supported. APIs and many interfaces are used to communicate with the main engine. It’s a “build as you go” method that makes it easy and comfortable to use.

Everything in a Widget

Flutter is all about the way it feels, looks, and works. It enables updated code assimilation into Dart Virtual Machine, allowing quick reflection of the interaction models in alignment with styling and text.

Flutter follows a multi-paradigm programming architecture that is functional, event driven, reactive, imperative, and declarative. The UI contents are updated automatically when the variables in the code are updated speeding up time considerably. Flutter supports Google Fonts as well. you can start with 34 trillion fonts.

Flutter gives developers the ability to create apps that are both faster and more dynamic. Keeping in mind the ease with which you may make changes to the code and see the results as you enter in real time. Google refers to this as a “hot reload.” It allows developers to add new features and fix errors in real time, allowing them to “write as we speak and see as you type.” With increased speed and flexibility, developing an app from scratch can take 2-3 months, and each stage can be imagined as walking in the dark with a flashlight.

You may alter logos, buttons, and each and every pixel on the screen can be modified, tweaked, and replaced in real time.

The framework is incredibly adaptable. It includes a library of scalable widgets with dynamism for the developer’s benefit. App designers may easily tap into their artistic side.

The developers write a single codebase for both the Android and iOS platforms, allowing the same software to be delivered on both platforms.

Flutter’s ability to run on both platforms decreases the amount of testing required. Because there is only one app to check, Quality Assurance will have to do less work.