Although the data given to us has several snippets corresponding to each parent-subsidy pair, only some of the snippets reveal actual parent-subsidiary relationship. Therefore we felt that concatenating the snippets corresponding to each pair  into one single article and then training can give the model more information about which text snippet actually reveals the parent-subsidy relationship. A Bidirectional GRU models each sentence into a sentence vector and then two attention networks try to figure out the important words in each sentence and important sentences in each document. In addition to returning the probability of company 2 being a subsidiary of company 1 the model as returns important sentences which triggered its prediction. For instance when it says Orcale Corp is the parent of Microsys it can also return that
Orcale Corp’s Microsys customer support portal was seen communicating with a server known to be used by the carbanak gang, is the sentence which triggered its prediction.

In each text snippet irrespective of the real name of the involved companies, the context around it offers information on the directed parent-subsidiary relationship. Hence in each text snippet we replaced the corresponding parent company and subsidiary company with alias ‘company1’ and ‘company2’.

It is to be noted that the number of text snippets corresponding to each pair in the training data varied largely from some companies like Google and YouTube having approximately 4000 snippets to smaller companies having 2 or 3 snippets.  Such a huge variance created big troubles in the test data which will be explained later. 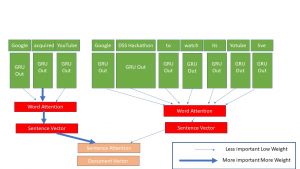 The objective of the neural network is to model this.

The model is capable to taking all the articles corresponding to two companies as input and it gives out a probability of company 2 is a subsidiary of company 1 based on the text snippets.

In addition to this the model as returns important sentences which triggered its prediction. For example

from the test set we can see, a sample output

We can see that the model predicted the important sentence amidst several irrelevant sentences. 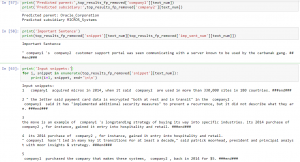 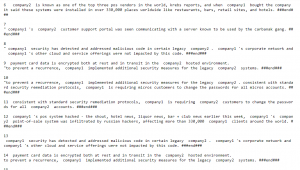 The predicted parent-subsidiary pairs are: